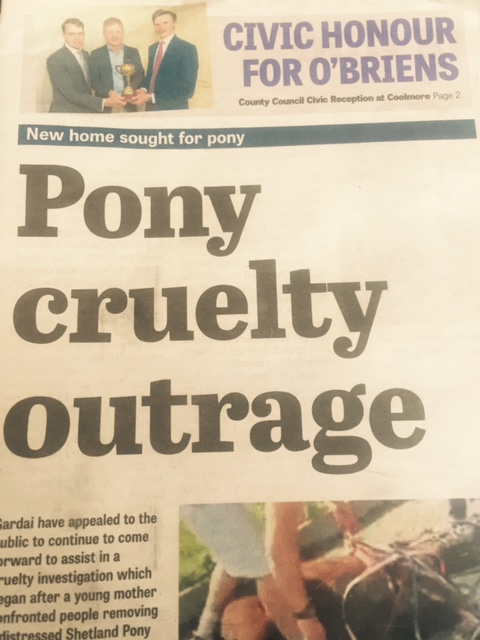 Most of us are familiar with the Guinness ‘Made of More’ advertisement campaign that depicts modern day cowboys in LA, who have turned their backs on gang crime and violence.

These men have taken the road less travelled by many of their peers: they have chosen a life of peace – one automatically created when they rescued and started caring for horses. Their equine relationships steered them away from problematic relationships and into more meaningful ones. The group of men shown in the ad are led by Keenan Abercrombie and he asks the question: ‘Did I save the horse, or did the horse save me?’

Meanwhile, last week in Ireland, out FaceBook feeds were filled with the disturbing video of Whisper, the tiny pony who fell to her knees, as she struggled to pull a sulky up a hill. We saw young men trying to pull her up, when she clearly was exhausted and dehydrated! No urgency to get water for her or no urgency to call a Vet. TV3’s main news led with the story, and The Nationalist made the story its front page. PONY CRUELTY OUTRAGE, their headline aptly summed up our feelings.

And then in Carlow, a story emerged of two youths who shot a family pet cat with a pellet gun, slowed her down, only to set their dogs on her. So, why do some young men save animals, even turn to animals to save them, whilst animals have to be saved from other young males?

In my last blog, I talked about how we have to take evidence of intentional animal cruelty very seriously. Acts of cruelty to animals are not mere indications of a minor personality flaw in the abuser, according to PETA, in fact they are symptomatic of a deep mental disturbance. Research in psychology and criminology shows that people who commit acts of cruelty to animals don’t stop there – many move on to their fellow humans. A police study in Australia revealed that ‘100 percent of sexual homicide offenders examined has a history of animal cruelty’. The FBI have time and time again made the connections between animal and human cruelty. One agent said in an interview, how ‘some kids just do not get told why they should not harm an animal’. Early intervention is key. If you truly love your children, surely you would want to intervene if these indicators of future abuse or crime are present. If you love your own children, you should report any signs of animal abuse you see, so official intervention can be put into place. You might just save that animal’s life and a human’s life one day. Abusers target the powerless so that is where we come in! We need to be there for them: be there voice and protectors.

In some countries, via their court system, those who abuse animals are aggressively penalised and ordered to attend counselling and be psychologically evaluated. Whilst the majority of our sentences for animal cruelty are suspended, with some abusers not even getting a ban! In Clare, a farmer, starved his horses. He got a warning from a department vet to sell them or move them on. Who will buy emaciated horses? So, when she returned weeks later, she found many dead, and those who were alive, had to be put to sleep. The case went to court and the judge spoke to him, and told the court room, that he was sure he didn’t mean for it to happen, and wished him well! Yes, that certainly was not a deterrent for others starving their horses intentionally.

Animal abuse is unacceptable and you or I could be at risk because of an animal abuser in our community. We need to teach care and compassion from a young age. We need to encourage our young people to have better relationships with animals that cross their paths. Animals should be seen for how they can enhance our lives, and even protect us and save us. I know of two people who considered taking their own lives, and they were kept from the water or the edge of a cliff, because they thought of their animals waiting at home for them. Recently there was a lady in England who went to attend a calf that was crying. The mother cow, thinking she was harming her baby, practically sat on her. Her mare was in the field as well, and saw that her owner was at risk, so she literally kicked the cow off the owner. Until recently in Ennis, there was a herd of goats, and some of them didn’t take it too well when I went anywhere near the kids. But one day, the kids were crying and they seemed so stressed. One of the goats was after being knocked down on the road but made her way back into their field to die. I couldn’t get anyone to take her away, and I couldn’t get anyone to help me bury her. The flock were reluctant to leave her side.

There is a mare here that I feed and for the entire time I was there burying the goat, she stood beside me, and as I cried for the mommy goat, Holly leaned on my shoulder whilst keeping a protective watch on the male goats who were not too happy with what I was doing. No, animals can’t give us a hug or words of comfort; they do alot more.

Tell your children or the young people in your life who might go to hurt an animal – tell them ‘they are made of more’. Tell them to value and appreciate animals and anything less – well, that is just not acceptable and there will be consequences. Teach empathy. Saying ‘NO’ is now the most underused word by parents and guardians. When that ‘NO’ might just stop your child seriously harming an animal; saying ‘NO’ might be the word to save their freedom and someone’s life one day.

*Whisper is doing well and I am sure in time, she will have a place to call home

2 thoughts on “Made of More than this?”